During the Renaissance the Stozzi family were competing with the Medici family in richness and power. In 1489, Filippo Strozzi commissioned Benedetto Da Maiano and Simone del Pollaiolo, called “Cronaca” to build Palazzo Strozzi, in the centre of Florence, and it became one of the most significant examples of Italian architecture in the Renaissance. Villa Strozzi-Riccardi in Settignano has belonged to the same family for 6 centuries and was their country residence. Its history tells us that in 1379 the Villa was already in the possession of the Strozzi Family.

The Villa is linked to the popular uprising called “tumulto dei Ciompi”.

Scipione Ammirato in his XIV book of “Historie fiorentine” recounts that Mariano degli Albizi, accused along with his family of tyranny against the people, was in hiding at the Villa. Maddalena di Carlo di Strozza gave it as a present to her grandchildren Niccolo’, Lorenzo, Uberto and Tito di Giovanni di Carlo Strozzi who, in 1427, described it to the Land-Office as “uno chasamento in chontado chon pozi, loggia, corte, chasa da stalle (…)posto nel popolo di S.Martino a Mensola” (a house with a well, a loggia, yard and a stable(…) in the village of S. Martino in Mensola.

In the second half of the sixteenth century, Count Piero di Carlo of Andrea Strozzi made some changes that gave the villa its present appearance. At the beginning of the eighteenth century the Chapel was built, replacing a smaller one that was inside the Villa, and it was decorated with ceramics by Della Robbia (today lost).

Read more about Strozzi family and Renaissence in Florence

The Medici: Godfathers of the Renaissance

Birth of a Dinasty 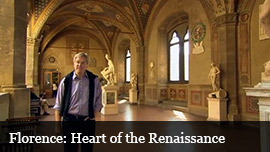 Florence: Heart of the Renaissance